“Eproductive is a company that develops solutions which the client wants … We feel really valued as a customer.” – Marie Egerton, Head of Retail

St Luke’s Hospice Sheffield is a charity which cares for people in Sheffield, aged 18 and over, who are affected by terminal illness, whilst supporting their families and carers. The charity has 13 shops across the city of Sheffield, including online, all of which sell a wide range of donated second-hand goods.

If just half of all of the bags donated to St Luke’s in one year were gift aided, an additional £100,000 could be raised, which would go towards the patient care offered by St Luke’s.

In November 2018, St Luke’s Hospice went live with our EPR package, which includes Touch tills, Retail Gift Aid, and a reporting suite. Another vital component is Digital Donor Sign-Up, which is installed on tablets provided to the shops and allows donors to enrol in Gift Aid in a way that is paperless and improves the quality of the data collected.

Due to the ease with which donors can sign up to Retail Gift Aid, an additional £80,000 has been raised through the sales of donated goods in the first year of the launch.

Catching up with St Luke’s

In February 2020 (a month before charities were told to close their shops due to COVID), we checked in with Marie Egerton, the Head of Retail at St Luke’s, to ask how the process had gone and what progress they have seen since adopting EPR Touch tills and EPR Gift Aid in their shops.

★ So easy and hassle-free

About moving over to EPR Touch, Marie said: “It was so easy and hassle-free. During the implementation and installation period, Eproductive staff members were there to do extensive training for the shop managers and for key members of the volunteer teams, who got to use and play with the tills and ask any questions that they had, so they could be ambassadors to the rest of the team. For all the people who couldn’t make it on those days, there was somebody on-site to do some training as well.”

★ Tills are a lot more straightforward, a lot easier to use

When asked how volunteers in the shops took to our EPR Touch tills, Marie replied: “Really well and really quickly. The tills are a lot more straightforward, they are a lot easier to use, they have got bigger buttons; the actual process of putting a transaction through is very straightforward; the screen is so easy to use.”

★ Nothing but a success

Regarding the effect that EPR Touch has had on both stock generation and the collection of donors’ details for Gift Aid, Marie said: “It’s been nothing but a success. The new process has been really welcomed. It’s a lot quicker in the backroom which means that stock is getting onto the shop floor more quickly. And people aren’t afraid of processing Gift Aid now. There is less paperwork because everything is being done digitally, which means it is more GDPR-compliant. Email capture has significantly increased, which means fewer bounce-backs when thank-you emails are sent out, and our postage has been significantly reduced.”

★ The figures are phenomenal

Speaking about the impact EPR Touch has had on Gift Aid conversion, Marie said: “We were on a 19% conversion rate before EPR Touch and now we’re on a 26% conversion rate, so it’s been a massive increase. In terms of monetary value, after seven months from when we did our first claim with EPR Touch we had raised the same amount of money that we raised annually with our previous supplier. Those figures are phenomenal. We have shops which were doing well before, but they are doing exceptionally well now – they’ve consistently got over 50% Gift Aid conversion. Every shop has increased their Gift Aid conversion.”

Marie added: “And because it’s been such a dramatic increase, it has re-ignited the passion for asking for Gift Aid. As it has become hassle-free, it doesn’t seem like a big chore to do Gift Aid. And because the shop teams, on an individual shop level, have seen the difference it is making, it is driving them even more to promote it.”

On the subject of donors’ engagement with the Gift Aid process, Marie said: “With the thank-you emails that the donors get, even though it’s a do-not-reply inbox, they do reply and say ‘thank you for the thank-you, it’s a pleasure’. We’re getting really good feedback from being able to send donors thank-you emails.”

When it comes to working with Eproductive, Marie said: “You are a company that develops solutions which the client wants. Everything that’s been important to us at St Luke’s has either happened or is coming, so we do feel really valued as a customer.” 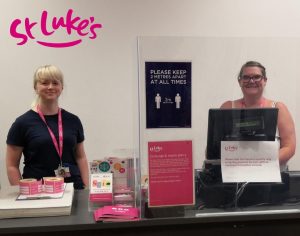