The Mary Stevens Hospice in Stourbridge went live with Team, Eproductive’s engagement app, on 5th November to their 150 members of staff. Their c.500 volunteers will also have access to the site in the coming weeks. In the three weeks since the site’s launch, the hospice’s staff on myMSH are already reaping the benefits from Team.

The hospice’s Business Development Manager, Gerry Crow said “We were obviously hoping that myMSH would be good, accepted by staff and seen as an innovative way to bring all parts of the Hospice and its associated businesses together.  Even though still very much in its infancy with us we are all extremely pleased with the way it has been accepted and utilised throughout the Hospice; with inputs being received from staff with suggestions on how to make improvements.  It is a high quality product, which is simple to use and backed up by a professional team at Eproductive who have been highly reactive to our needs”.

With regular news, videos and documents being uploaded to the site, the staff at the hospice have a greater sense of the exciting events and news at the hospice. Tess Sanders, Project Manager at Eproductive, said “it’s been fantastic to see how well the Mary Stevens Hospice is getting on with Team. The staff have been providing feedback in the ‘Suggestion Box’ app, on how they would like to see the site improve, as well as ideas for improving the hospice. Regular messages via text or email have also been sent out from myMSH to staff, keeping them engaged with the hospice on their PC, tablet or mobile phone”.

The hospice will also be launching the Volunteer Database this week, which will allow for greater knowledge of their volunteers, both in house and retail, as well as extra benefits such as rostering and access to reports. 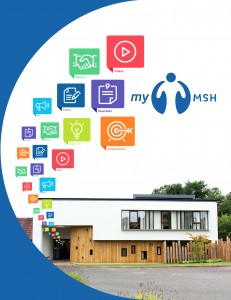